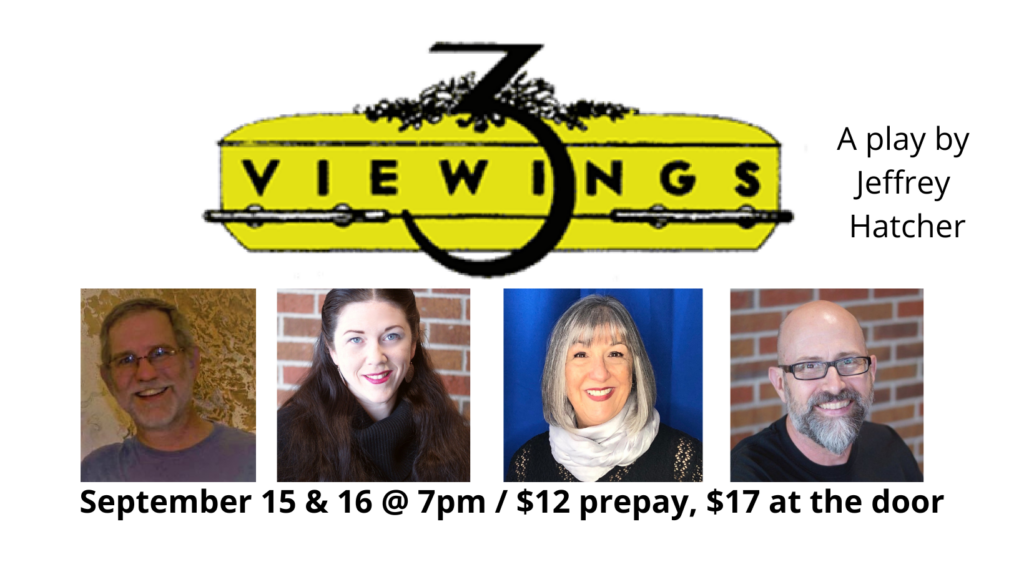 August 31, 2022, Midland, MI. – On September 15 and 16, Creative 360 will present the darkly funny play, “Three Viewings”, on the Bayliss Gallery stage.  The play, written by Jeffrey Hatcher and directed by Bay City native Mike Wisniewski, is a charming yet darkly funny show that will tug a few heart strings.

“Three Viewings” is actually three separate stories set in a Midwestern funeral parlor.  Each tale is told by a single character, including a love-struck undertaker and a grave robber, and presents some unexpected twists along with themes of secret love, secret pasts, and secret debts.

“This is such an entertaining and clever script,” remarked director Mike Wisniewski. “The audience will be pleasantly surprised at how funny a show that takes place in a funeral parlor can be.”

“Three Viewings” kicks off Creative 360’s 2022-23 Performance Season which will include the Broadway Flight Series, Blast from the Past, Old Time Radio, MOMsemble, Spring Shakespeare and more to the Bayliss Street venue.

“One of our reasons for obtaining the new galleries and classrooms downtown was to free up space in the Bayliss Street building for more performances and concerts,” said Creative 360 director, Laura Vosejpka. “We are very excited to kick off this new season with this wonderful production featuring Laura Brigham, Carol Rumba and Jim Stewart.”

Performances of “Three Viewings” are scheduled for Thursday, September 15th and Friday, September 16th at 7pm. Admission to the show is $12 pre-pay, or $17 at the door and guests are invited to BYOB and refreshments to the dinner theater style set-up. Creative 360 asks that you please note that there is some adult language in the show.