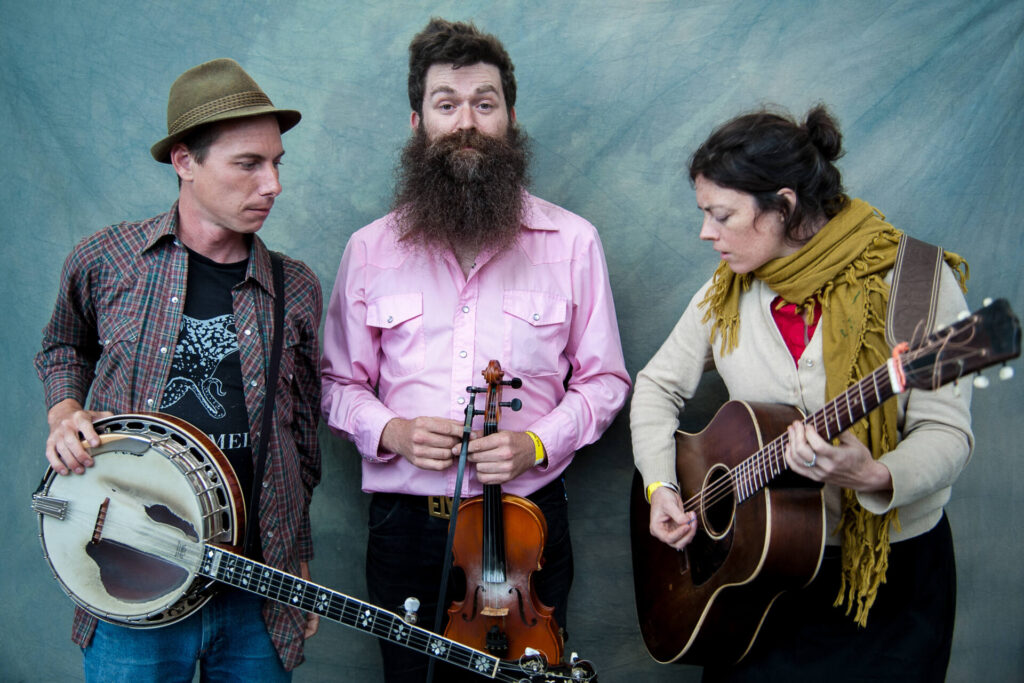 Jan 28, 2022, Midland, MI. – On Sunday, February 6th at 2 pm, the Corn Potato String Band will take the stage at Creative 360 for an action-packed, family friendly concert featuring American folk music. Their music incorporates the fiddle, claw hammer banjo, guitar, bass and mandolin and the trio has played around the world to rave reviews.

Midland resident John Bunch, also a folk musician, approached Creative 360 about hosting the concert.  “We love when community members tell us what they are excited about seeing and doing,” said public relations coordinator Laura Brigham.  “The Corn Potato String Band is a perfect fit for us and this concert, and the accompanying workshop, will be a great way to spend a snowy Sunday!”

Cleverly referred to as the ‘ears and eyes’ of America, Aaron Jonah Lewis, Lindsay McCaw and Ben Belcher are dedicated to continuing the music and dance traditions of the Central and Southern US. The Corn Potato String Band has brought people to their feet in the US, Canada, Europe, Mexico, and India with their “high spirited music” and “raw, homespun feel”.

The group is also offering a claw hammer banjo clinic to be held the same day as the concert at 12 pm. In keeping with Creative 360’s mission, the clinic is open to all ages and abilities is for anyone interested in learning more about the Clawhammer Banjo.

“This is going to be awesome,” said Bunch, a longtime fan of the group and Creative 360 board member, “you do not want to be left out in the cold, because they are hot!”

The concert, which is general admission seating, begins at 2 pm and is $15 prepay, $20 door for adults and $10 prepay, $15 at the door for students. The Clawhammer Banjo Clinic which starts at 12 pm and runs for 90 mins is $35 per person.