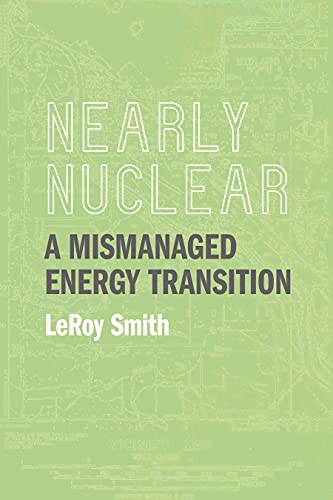 Yes We Can! presents Nearly Nuclear with LeRoy Smith

October 5, 2020, Midland, MI. – This Thursday, October 7 at 7pm, Creative 360 is offering a chance to learn the untold story behind the nuclear power plant that was planned for Midland in the late 1960s.  At 7 pm, LeRoy (Lee) Smith will give a talk on his recently published book Nearly Nuclear: A Mismanaged Energy Transition.  This event is part of Creative 360’s Yes We Can! program that honors the accomplishments of Midland community members who are 80 years old and older.

“The story of Midland’s nuclear power plant program is a fascinating one that many Midlanders have heard of, but few really understand,” said Creative 360 director Laura Vosejpka.  “Lee will be sharing information from his fascinating book as well as photos, diagrams, and information that did not make it into the book!”

Nearly Nuclear tells the story of Consumers Power’s attempt to build two large nuclear reactors in Midland.  As Consumers struggled to complete the flawed project, many persons and groups, including The Lone Tree Council, Mary Sinclair and Michael Moore, played a role in the abandoned project, which ultimately led to the MCV plant.

Smith, former Vice President of Energy Supply and Marketing at Midland Cogeneration Venture, is a former US Nay engineering officer and trained geologist.  He currently has his own consulting firm, Optimal Value Energy.  He has testified before the Michigan Public Service Commission, the Federal Regulatory Commission and the National Energy Board.  Beside this recently published book, he also writes about fracking and carbon dioxide sequestration in Michigan.

Tickets to the event are $5 and can be purchased online at becreative360.org or by calling 989-837-1885.  The book is available for purchase at Midland and Saginaw Barnes and Noble stores as well as Amazon.com.  Lee will be happy to sign copies of the book that guests bring with them.