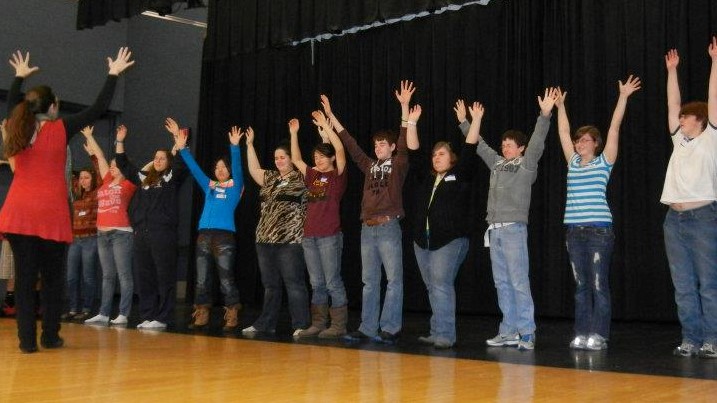 July 5, 2021, Midland, MI. – This month, Creative 360 is providing a unique summer acting camp experience for students ages 10 through 15.  The Show Must Go On! Theater Performance Camp runs from July 12-16th, with a final performance on July 16th at 7 pm at the Bayliss Street building.

A notable aspect of this camp is its director!  Laura Brigham is a professional actor, director, and casting director who has taught classes and camps for both adults and children all over the country.  Brigham saw the need for a professional level camp for pre and young teens.  “There are many theater camps for high school aged students, but most actors were drawn to the stage long before they reached high school,” remarked Brigham. “This camp experience offers skills that will help young actors feel at home at any level of theater.  ”

Brigham, who resides in Midland with her family, has served as the casting director for Festival 56, a theater company in Princeton, Illinois, for nearly 20 years.  She has her own private acting and audition coaching business, Brigham Studios, where she works one on one with actors who are auditioning for roles and scholarships.  Brigham has performed in 46 states and has directed well over 40 productions around the country.

“Creative 360 is hosting TMI – Teenage Musical Inc – in August and it made me think that there is a need for young actors to learn the tools that they need to successfully compete for those roles,” Brigham said.  “The five day camp culminates in an evening performance where the actors will gain practical experience and put what they have learned to use right away.”

Learning how to “own the stage”, analyzing scripts, “table work”, and making the most of your instincts are just some of the areas that will be addressed in the five day experience.  Each participant will be given a role to perform in the final performance at 7 pm on Friday, July 16 on Creative 360’s indoor stage.

There are limited spaces remaining in the camp, which runs from 1 – 4 pm the week of July 12th.  The cost is $100 and sign up is available over the phone or online at becreative360.org.  Additionally, there are a limited number of need-based scholarships available, please call Creative 360 for scholarship information.

You can find out more about Creative 360’s Summer Camps, programs and classes on their landing page.