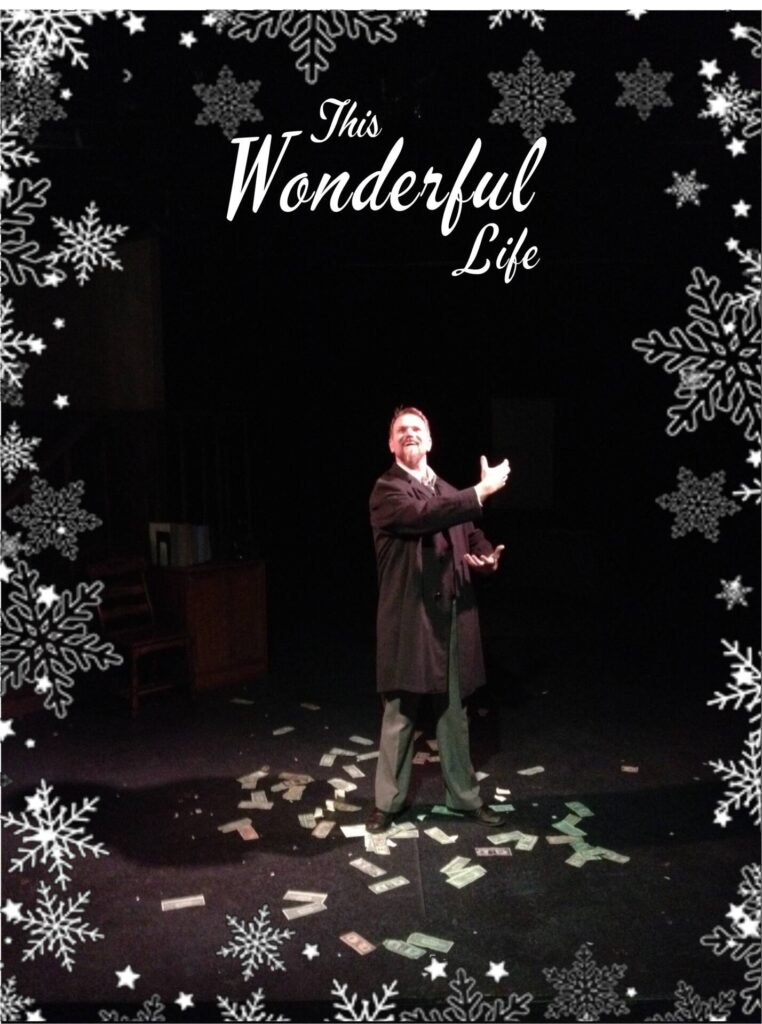 The Frank Capra classic, “It’s a Wonderful Life”, is one of the most beloved movies ever.  Creative 360 is excited to partner with local actor, Dexter Brigham, to bring a fresh new take on this holiday classic just in time for the holiday season.

The story of George Bailey, played by Jimmy Stewart, a man who has given up his own dreams to help others and whose imminent suicide on Christmas Eve brings his guardian angel, Clarence to remind George just how he has touched the lives of so many people, is one that families have enjoyed since 1946. The Hollywood version of the movie boasts an all-star cast – Jimmy Stewart, Donna Reed, Lionel Barrymore.  But Brigham’s work has a distinct twist.

It is a one man show!

In “This Wonderful Life,” a fast-paced, funny, and poignant rendition of the film, Brigham masterfully plays all characters, from Guardian Angel Clarence to George Bailey’s daughter Zuzu. Brigham’s talented portrayals will have you thinking you are actually listening to Barrymore – as the evil Mr. Potter – or Stewart – as the altruistic and confused George Bailey.  The one man show was written by Steve Murray.

Brigham’s performance was originally slated to be offered in person the weekend following Thanksgiving.  However, the most recent Michigan Emergency Orders meant that all in person performances at Creative 360 had to be cancelled.  When asked if he would take on the challenge to translate the performance to video, Brigham gladly accepted.

“This show is such a unique take on the classic film,” remarked Executive Director Laura Vosejpka. “We were so disappointed when we thought we would have to cancel this offering.  But Dexter truly met this challenge and with the help of Director Laura Brigham (also Creative 360’s Office Manager, a professional actor, and Brigham’s wife) and Dan Andrews, our Event Manager and a sound and set expert, an absolutely beautiful video version of the work came about.”

The video link is housed on Creative 360’s private YouTube channel so it can be easily streamed or cast to your smart TV.  One positive aspect of the virtual performance is that the audience can choose when they will watch the show.

“It was so great to work with Laura and with her Creative 360 ‘family’ to bring this show to the community,” said Brigham.  “This is a challenging work to perform, but one that I love to do. It is an uplifting story that we really wanted to share during this particularly difficult holiday season. As an actor, I appreciate the chance to strip away the lights and scenery and really take on the challenge of bringing these characters to life with my voice and body.”

“Everything about the performance world has changed in 2020,” commented Laura Brigham. “That we are offering an isolated, solo version of this ensemble movie in a virtual setting is surely a sign of the times. But it really works!  We shared the link with several folks this weekend and all of the feedback has been very positive.  Once viewer commented that this version of the movie really highlighted Bailey’s internal conflicts and made the whole story seem more personal and relatable to a modern-day audience.“

Access to the performance can be purchased through Creative 360’s booking site (becreative360.org/events) or by calling the arts non-profit at 989-837-1885.  The cost to access the link is $10 (cash or check, $13 credit card), which was the original ticket price for the weekend performance, and it is available for purchase through the end of the year.  Contact Creative 360 if you have questions.