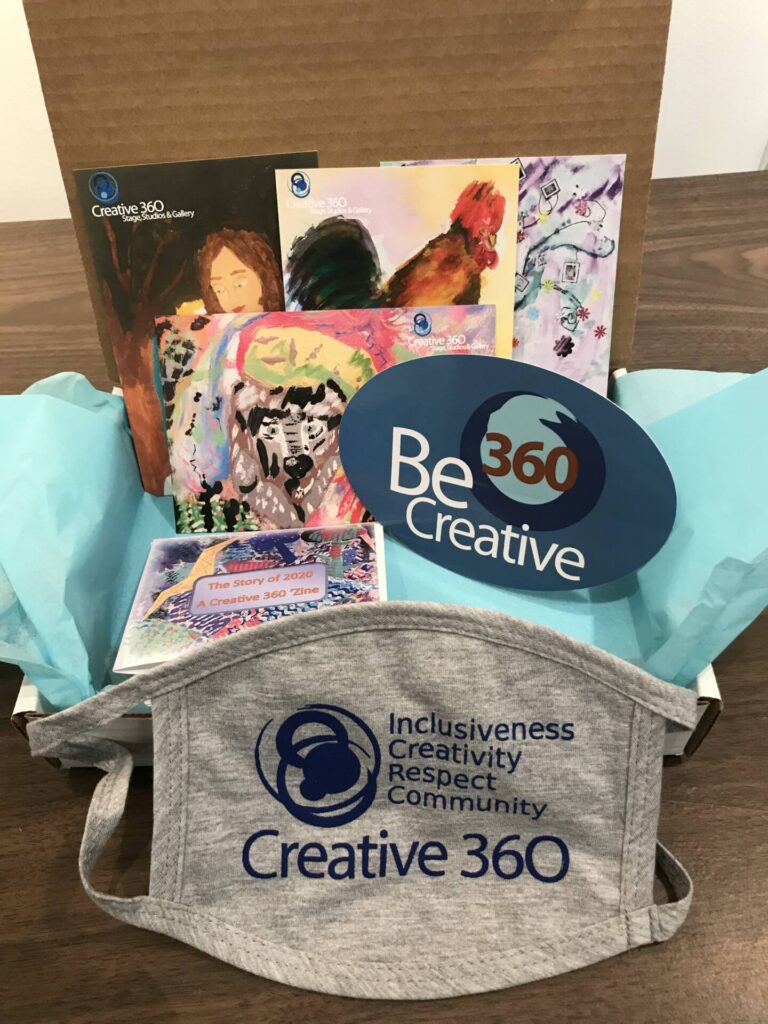 Starting October 15th, Creative 360 will launch its “Inside the Box” Fundraising Event.  Using the same general idea of the ArtSpark Creativity Kits, we will curate a special ‘kit’ for fundraising based on the structure of its long popular Creative Connections luncheon.

“We knew we would not be able to get everyone together to celebrate the successes that Creative 360 has seen this year, in spite of the COVID related closures and slow downs,” said Executive Director Laura Vosejpka.  “Our ArtSpark boxes are designed to bring art to our supporters in the comfort of their own home – we decided that we could use the same concept to bring the Fundraiser to our supporters!”

Vosejpka and fellow 360 staff members Colleen Reed (Program Director and Gallery Curator) and Laura Brigham (Office Manager) designed the new fundraising plan after a number of conversations with Creative 360 co-founder, Linda Z. Smith, who moved to Florida with her husband, Dave, after losing their Midland home in the flood this past May.

“It was important to us to work with Linda as we designed this new plan. She has been incredibly supportive as I stepped into the role of Executive Director.  When she told us she really liked the idea, I knew we were on the right track,” remarked Vosejpka.

“Our luncheon fundraiser relied on Table Captains who would make the commitment to fill tables at the Great Hall with guests who would be intrigued by Creative 360’s work and who would commit to supporting our programs.  This year Box Captains will deliver a Fundraising Box to the same guests they would have invited to the luncheon,” Reed explained. “Each box has information about who we are and what we do for the community.  Additionally, each box has a series of pre-printed postcards, featuring the work of our Artshop students, that the box owner will use to reach out to their own circle of friends, requesting support for Creative 360.”

“There are also some special surprises in that box – after all – we are Creative 360!” added Brigham.

Supporters of Creative 360 do not have to be invited by a Box Captain to secure a fundraising box.  The staff shared that anyone who wants to help Creative 360 raise funds can call or stop by to request a Fundraising Box.

The Inside the Box Fundraiser will officially kick-off on October 15th, the same day that Creative 360 opens its Art In Isolation:  Creativity in the Time of COVID gallery exhibit.  Those interested in supporting Creative 360 can contact them at 989-837-1885, at creativity@becreative360.org or by stopping in at the center.  You can also donate on the website here.