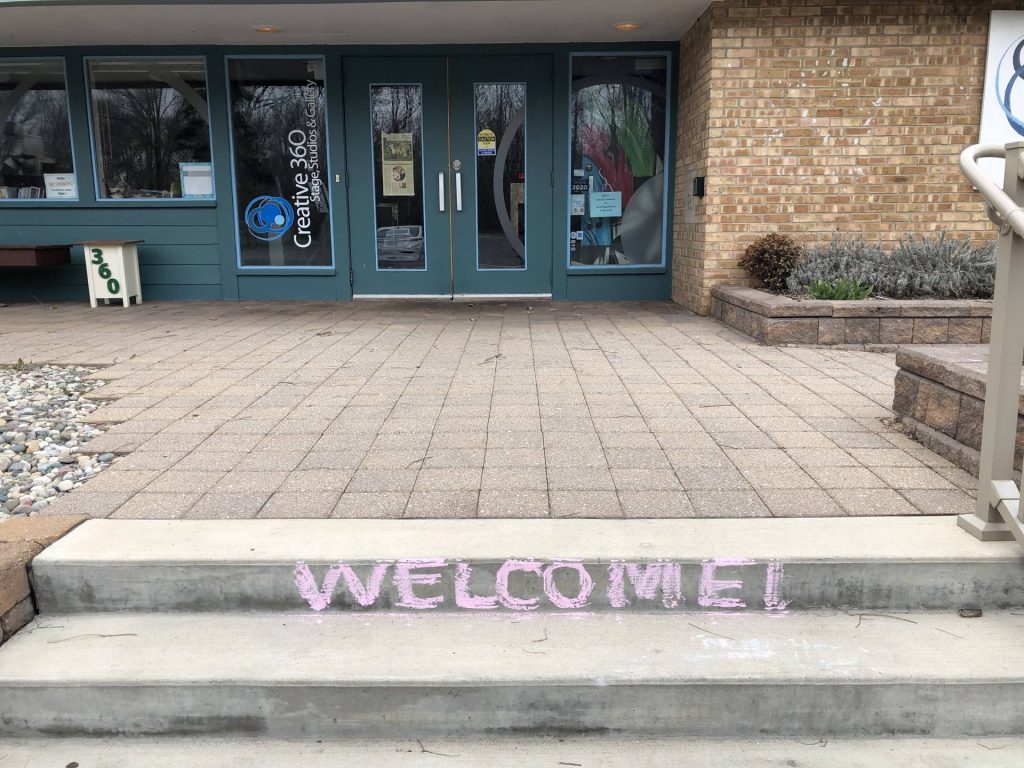 Ten weeks ago, lives abruptly changed when the global pandemic brought about stay-at-home orders and closure of all non-essential businesses. For Creative 360, it meant an abrupt end to a robust winter season of Artshop classes, Yes We Can! events and more. Determined to continue their service to the community, the nonprofit found ways to do so virtually. Now Creative 360 is excited to reopen their doors to the public – a little bit at a time.

As the Governor’s stay at home orders were extended, Creative 360’s staff held their collective breath. Each time the Governor delivered an update, they were hopeful to be able to greet their friends once again. “We simply rescheduled events for a while and then sadly realized we would not be completing the season,” explained Interim Executive Director Carol Speltz.

Once this realization set in, Creative 360 staff brainstormed together via weekly Zoom meetings to figure out how they could still serve the community when it was not safe to gather. The determined team decided to create a new environment to take the experience of creativity home – virtually. This new environment capitalized on social media tools to offer video tutorials, cooking classes, an art exhibit, a weekly NIA movement program, story times and two virtual art shows.

“One of our biggest concerns was for our Express Yourself Artshop students,” said Artshop Program Coordinator Allise Noble. “They are a tight-knit community of people who each thrive when creating together. We knew we had to reach out to them with some new options, which led to our online tutorials.”

Near daily video tutorials offered by Artshop teachers Shelby Hatt, Allise Noble, Emiliano Vega and cooking instructor Diane Sweet-McKimmy were developed and offered from Creative 360’s You Tube channel and Facebook. Geared toward people of all ages and abilities, they are often enjoyed by families who follow along to create art while staying safe at home.

Another online Express Yourself Artshop offering came about when the planned Earth Day celebration had to be canceled. The celebration was to be a pop-up art exhibit and sale with proceeds being shared between the student artists and the Artshop program. Again, staff brainstorming brought about a new solution – A Virtual Art Show and Sale. The first was such a success that a second was three weeks later, and a third is scheduled for June 17. Guests who join the event learn about each piece of art presented and then have an option to buy. Their payment is processed online and then they can drive up to Creative 360 to have their purchases delivered to their car. Proceeds so far from these shows have brought in nearly $1000! These online shows are likely to continue, because they are a great way to showcase student work.

Other online offerings that will continue through June are weekly Facebook story times and a NIA movement offering. NIA is offered each Wednesday at 11:00 am via Zoom meeting. Registration is required on the Creative 360 website. Story times are a Facebook Live event on Thursdays at 11:30 a.m. Each week, both the book and the reader is a surprise.

“Now that we can open our doors, we’re looking forward to getting back to normal at some point,” said Speltz. “I think though, normal is redefined by Covid-19 concerns, which require a combination of in-person and online services.”

The first step toward reopening happens Wednesday, June 10. Creative 360 will begin to greet visitors to their gallery at 9:00 a.m. Guests will enjoy the annual Midland Artist Guild exhibit which was unable to have the normal opening reception and was instead, made available from the Creative 360 website.

“While the online photos were beautifully done by photographer Charles Bonham, there is nothing like being in the room surrounded by the color, texture and talent on display,” explained Program Director and Curator Colleen Reed. “We are so happy that people are able to enjoy its full splendor!”

Even though a reopening date was uncertain, Colleen has been working hard to ensure the display is as artfully done as all she has done in the past. Not only will people get to experience the exhibit, an awards gala planned for June 26 will be at least partially attended in person. It will also be offered online.

Another event planned for June is a drive-up concert offered by Ike Beehr & The Blues Guise. Ike and the band will deliver the concert from Creative 360’s porch to guests who will sit in or next to their vehicles in the parking lot.

“We were uncertain what restrictions would still be in place at the end of June and wanted to offer some kind of entertainment to the community,” Speltz explained. “The idea for a socially distanced and safe concert came to life.”

Now that restrictions have been lifted, Creative 360 staff is working to announce a full schedule of events for the summer. Dance summer camps begin June 20 and Express Yourself Artshop classes are scheduled to resume June 29. In both cases, the group sizes are small and easily socially distanced or even done outside. Follow the Creative 360 website for the complete schedule as it is developed. You will also find there the list of precautions in place to ensure your safe visit.