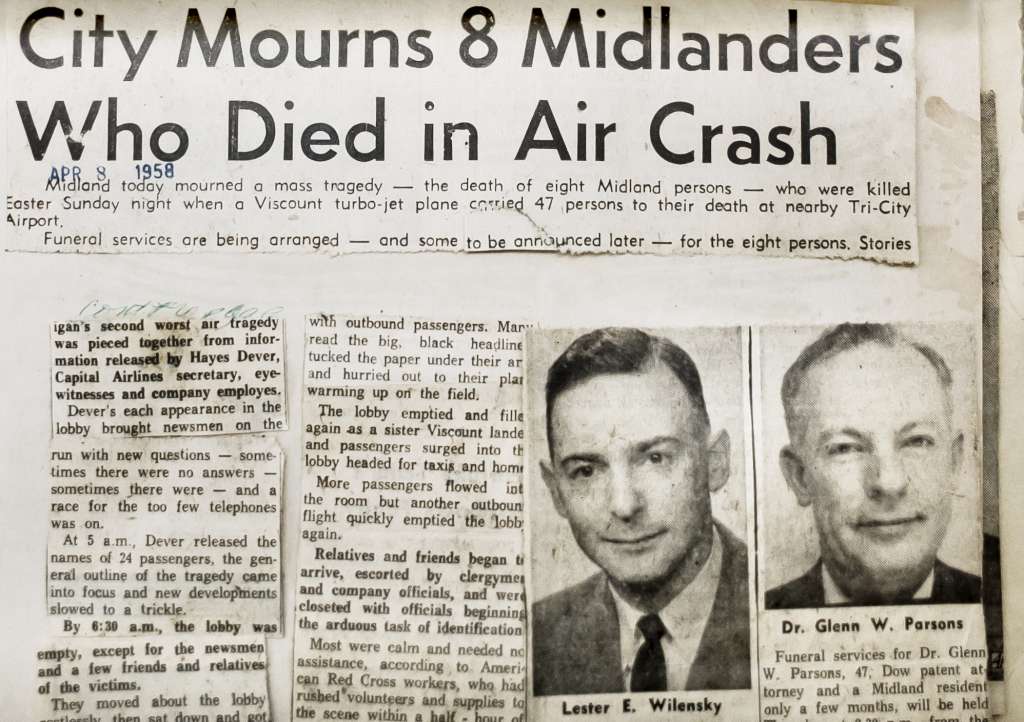 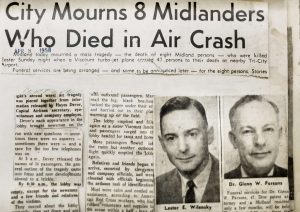 Sixty-one years ago on April 6, 1958, a terrible plane crash occurred at Tri-City Airport (now MBS International Airport) and claimed more lives than any other disaster before or since in all of central Michigan. Local historian Floyd Andrick will share clippings, photos and stories from that fateful day in the Creative 360 Gallery on October 23 at 7:00 p.m. Admission is $5. Guests are encouraged to register in advance by calling Creative 360 at 989-837-1885 or on their website at becreative360.org.

It was Easter Sunday. Airline schedules were significantly impacted by cold, damp, blustery weather across Michigan as occasional snow flurries fell to the ground. Capital Airlines flight 67 had been diverted to Newark, New Jersey rather than the originally scheduled LaGuardia Airport in New York due to heavy rains. Its departure from Newark for Detroit was an hour and 10 minutes late.

As the plane made its way to Detroit, weather in Michigan continued to deteriorate and a decision was made to divert flight 67 to Flint Bishop Airport rather than Tri-City. As weather improved, that decision was recanted and the flight, with all 44 seats occupied, headed out from Flint for a 14-minute flight to Tri-City Airport.

Strong winds rocked the plane and created icing conditions as the pilot flew over Freeland to line up with the runway for landing. When the plane was about 300 feet above the ground, witnesses heard the engines accelerate. In the next instant, a huge fireball shot into the night sky and a loud boom shook the ground. The plane crashed just 2,300 feet short of the runway. There were no survivors. 47 people lost their lives that day – many of them from Midland, Bay City and Saginaw.

Andrick will share the stories behind the story. Hear eye witness accountings of the incident and his own experience viewing the smoking wreckage the following day. Learn what caused the fiery crash, and hear the stories of those who were supposed to be on that ill-fated flight and were not for a variety of reasons. Andrick will also share the location of a memorial that lists all 47 casualties from the crash – it is not at the airport.

About Floyd Andrick
Floyd Andrick was born in Midland and has spent his entire life here. He has always been an avid historian, although he had careers in business, the medical field, and property ownership and management. For more than 20 years, Andrick has enjoyed volunteering and serving as board chair with several organizations, but especially the Midland County Historical Society. His interest in history has taken him all over the world doing a variety of presentations, primarily on the Titanic from which he has personally known 14 of the survivors.