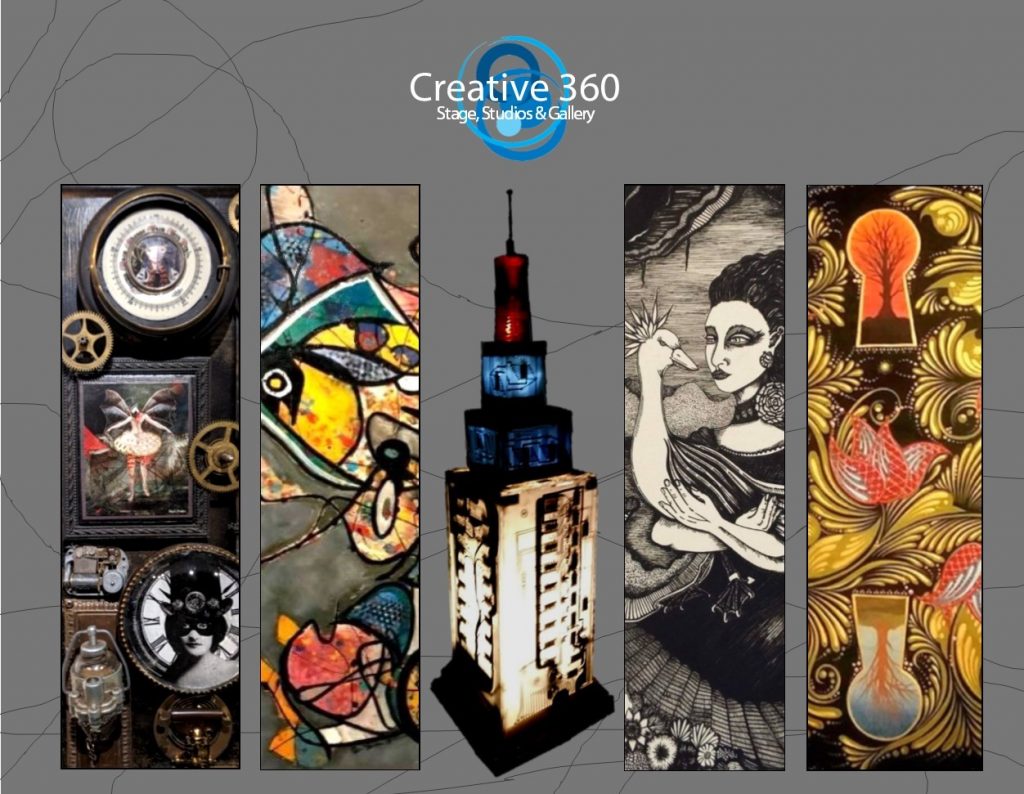 Creative 360’s next exhibit, An Interesting Mix, opens Friday, October 4 at 7:00 p.m. This exhibition showcases the work of five very different and diverse artists who most often share their talents at the C.A.T. Work Art Gallery in Bay City. Guests will enjoy art by Katie Balamucki who works with metal nib pens to create intricate, mystical pieces; Ashley Clewley who combines tole painting with gothic themes; Tom Larson who paints large scale abstracts; Roger Reichmann who constructs vintage assemblages with historical origins; and Terry Summers who creates steampunk lamps. This fascinating exhibit of local talent is, like all Creative 360 exhibits, free and open to the public. On exhibit through November 21.

Katie Balamucki is from Bay City, Michigan by way of the Metropolitan Detroit area. She uses India Ink and dip pens to create her work that often adopts the literary conflict “man vs. nature.” She says her artwork attempts to support the idea that when we have a healthy relationship with nature, it may open us up to the possibility of a healthy relationship with humanity.

Ashley Clewley has been a folk artist for 19 years since she began tole painting lessons when she was 11. She combines centuries-old techniques and forms with her own fluid, psychedelic style to create movement, dazzle the eye, and challenge the decorative limitations associated with the medium. Like many traditional tole artists, she works in acrylic on wood. Her “land and sky-scapes” are inspired by the 14th and 15th centuries, gothic painting, remembered dreams and her childhood in northern Michigan. The combination of other-worldly scenes with traditional folk techniques is intended to imbue the otherwise fantastic and symbolic with a sense of history. “The unreal combined with an illusion of reality, is a slightly disorienting one,” she said.

Tom Larson owns C.A.T. Work Art Gallery that features contemporary sculptures and paintings from Michigan artists. He creates unique abstract paintings, though he has dabbled in a variety of mediums since he seriously began pursuing art more than 30 years ago. He began by creating wood sculptures of birds and fish and drifted into assemblages of mixed media. He is proud of the fact that neither he nor his son, Carl, and daughter Amelia have had any significant formal art training, although all three pursue artistic endeavors. In fact, the name C.A.T. is an acronym of their three names.

Roger Reichmann creates what he calls “Altered Artifacts” that combine his interests in history, antiques and art. Since he began working in this medium about 13 years ago, he has assembled about 200 pieces. His award-winning creations are built on themes like manifest destiny, cowgirls, Native Americans, the 1920s and evolution. His work triggers a feeling of nostalgia, because it tells a story about a time or an idea. People have dubbed his creations his “time capsules,” which pleases him. His intent, he says, that people connect with them through their own personal histories.

Terry Summers, an electrician by trade, became intrigued with the work of Thomas Edison at a very young age.  Be became fascinated with Steampunk art after retired, and began creating vintage-looking lamps using antique items. He enjoys creating art that is functional as well as interesting and beautiful. His lamps all have new and modern conveniences like touch dimmers and LED lighting combined with vintage appeal.