On February 22 at 7:00 p.m., Creative 360 will host an opening reception for the Three Rivers…One Source exhibition featuring the works of Steve Barber, Steven Parkhurst and Mike Zureich. Each of these men have a distinct and recognizable style. The event is free and open to the public. Everyone is welcome. On exhibit through March 31. 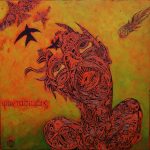 Steve Barber feels that creating is a celebration of life, even if the subject is ominous. His works are a visual diary of all that moves, inspires, annoys or makes him laugh. Much of his work is personal, but can also be inspired by literary sources. “I enjoy the complexity of line in my paintings. I strive to blend the strengths of both drawing and painting into a coherent and highly expressive creation,” he said. “Creating art has a healing effect on my soul by purging me of that which is unbalanced.” 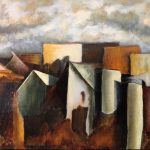 Steven Parkhurst has been interested in the visual arts from an early age. He is inspired by archetypical forms and their interactions used to construct the places where we live and work. “We are surrounded by our constructions, yet they seem to stand alone without us,” he said. “I encourage the viewer to make their own interpretations.”

During his professional career, Parkhurst practiced drawing, did fine art photography and dabbled in multi-media collage. He re-energized his creative talents by taking classes at the Midland Center for the Arts, later joining the faculty, teaching ceramics and beginning drawing. Today, Parkhurst concentrates on oil painting at his Flat Frog Studio in Midland. His work has been exhibited across Michigan. 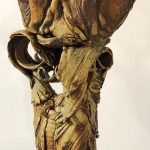 Mike Zureich is enjoying his return to “playing in the mud” after years away from the arts he first discovered in high school. His work is a combination of throwing technique, controlled 3-D surface distortion, form, flow, and transition relationships. He also applies drawing, painting and sculpting knowledge to his creations. “Everything I create has elements of my life experiences and most importantly the fun of getting back into the creative arts,” Zureich explained.

Zureich earned his Bachelor’s degree of Fine Arts from Eastern Michigan University majoring in fine arts and mathematics. He also earned his master’s degree in industrial technology at Eastern. He taught high school and middle school mathematics and computer science; was a CAD/CAM software developer and resource manager for nearly 25 years; and then began a career at the Dow Chemical Employees’ Credit Union. He began his artistic comeback in 2016, and has exhibited in Midland, Mt. Pleasant and Bay City.