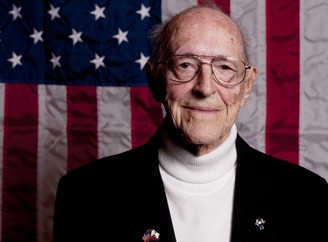 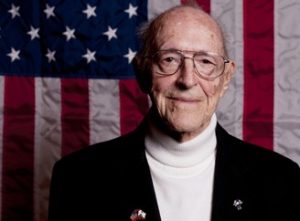 Creative 360’s next Yes We Can! Tuesday Tribute features a presentation by Navy veteran Gray Gorton who served on the U.S.S. Grafton during WWII. His presentation is Tuesday, February 12, 2-3:30 pm. Admission is $5.

The day after the Japanese attack on Pearl Harbor, Gray Gorton set off for the U.S. Navy offices in Houston, TX. Five years later, he found himself amid a battle for his life in the Pacific Ocean with Japanese kamikaze pilots crashing into surrounding ships, narrowly missing his own. 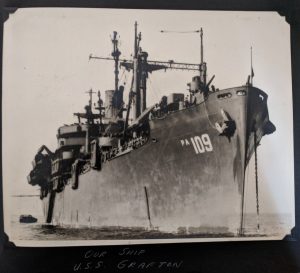 At  the time war broke out, Gorton was attending Rice Institute — now named Rice University — in Houston. His naval training didn’t begin immediately. “In those days, you were put in the naval reserves and allowed to continue your college education,” he said. “I was taking a discipline that the government thought was valuable to the armed forces, chemical engineering.”

As a reservist, Gorton worked as an apprentice seaman building destroyer escort vessels. Following his graduation in 1944, he set off for training in New York, and then set sail toward war in the Pacific Ocean on the U.S.S. Grafton where he remained until the following May.

Gorton describes his trip to Japan as one with “lots of water. There were tornadoes on the water called waters spouts, and we went through a typhoon,” he said.

“On the second day at Okinawa, we encountered the kamikazes,” said Gorton. “One splashed down alongside our ship, and covered us with water and some shrapnel. Thank goodness he had poor aim!”

Born in New Orleans and raised in Cuba, Gorton has lived in Midland for the last 51 years.

Creative 360’s Tuesday Tributes offer an opportunity to hear from and about an array of fascinating seniors – their lives, their creative process, and their adventures. Always on Tuesdays at 2:00 p.m., they offer lively conversation, tea, treats, and time for Q&A. There are ten Tuesday Tributes in the Yes We Can! schedule this year. The remaining are as follows:

Creative 360 has also added Yes We Can! evenings to the lineup that include two presentations from Dr. Basil Clark, professor emeritus at SVSU; a fabulous concert by The New Reformation Band; and a book signing and talk by Quita V. Shier who wrote the book, “Warriors in Mr. Lincoln’s Army.”