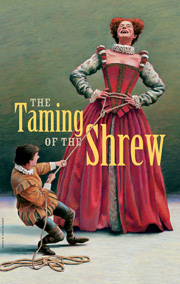 One of Shakespeare’s earliest plays, and one of his funniest, The Taming of the Shrew introduces one of theatre’s great screwball couples hell-bent on confusing and outwitting each other – the swaggering Petruchio and Katherina, the headstrong, obdurate shrew. To a modern audience, it’s also one of his most controversial. A strong-willed and outspoken woman is apparently broken and tamed by a man who seems to marry her for money and a macho challenge. But, perhaps it’s not quite as simple as that! This reading will give you a different perspective on a classic tale of the battle of the sexes, which still rages today.