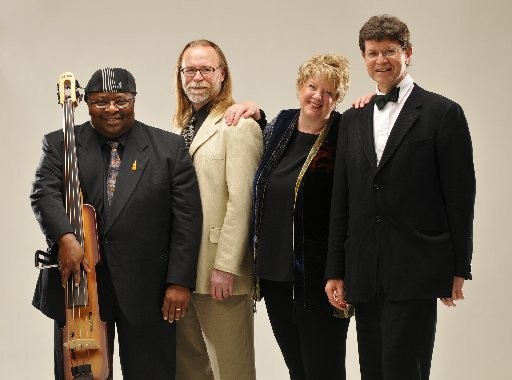 Molly McFadden and The Bistro Boys will return to Midland Sunday, November 12 to offer a benefit concert for Creative 360. David Smith on piano, Roland Wallace on bass, Pete Simonson on drums and Molly McFadden’s wonderful vocals provide the jazz we all enjoyed at Molly’s Bistro (2005-2012). The show begins at 7:00 p.m. Tickets are $20 per person or $35 per couple and include desserts from Grand Traverse Pie Company and the carrot cake made famous by Molly’s Bistro. Wine, coffee and tea will also be served. All proceeds go to Creative 360. Call 989-837-1885 for tickets or register online at becreative360.org.

Pianist David Smith recalls that his first meeting with Molly McFadden was at Creative 360 in 2004. “Molly performed with a group from other parts of Michigan and I went to see them,” Smith said. “I introduced myself at the end and told her I played jazz/cabaret piano. She was looking for musicians to perform in a restaurant she was opening. After an audition, I was hired to play solo for a while.”

Later, when a bass player was needed, Roland Wallace, who they knew as the best in town, was hired. Drummer Pete Simonson moved into town soon after. He was hired after an enthusiastic referral, and helped the group “keep time” in the busy restaurant. Their last performance together was in 2012 when the restaurant closed.

This year they were asked to play at a memorial service for Dr. William Gourd. After that, they decided they’d like to come back and deliver a fundraiser for Creative 360, a place McFadden had been involved with since moving to Midland in 1999.

“The trio and I want to do this fundraiser for Creative 360 because we want to give back for all they have given, and continue to give, to the community,” explained McFadden. “Creative 360 always has a path leading to an open door on the community front porch to celebrate art, theatre, life and music. That is what we will be doing.”