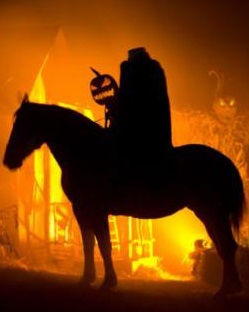 The Headless Horseman cast in rehearsal.

Experience the spooky fun and excitement of an old-time radio drama accompanied by musical score and live sound effects Saturday, October 21 at 7:00 p.m. when Creative 360 hosts its third radio drama, The Headless Horseman of Sleepy Hollow. The play written by Tony Palermo and directed by Carol Rumba takes you on a journey back to the days before television, when acting, musical score and sound effects brought the stories to life as families sat around their radios waiting to “see” what happened next.

Irving’s haunting tale is presented with all the thrills, chills, and laughs that will put you on the edge of your seat! Full of shivers and merriment, this Halloween classic follows the adventures of the bumbling Ichabod Crane and his hapless attempt to win the heart and hand of the coquettish Katrina Van Tassel.

Peter Brooks from Family Life Radio will serve as the narrator for this installment of what is fast becoming a regular feature at Creative 360. You can enjoy Peter’s broadcasting talent each weekday morning on the Peter and Shannyn Show.