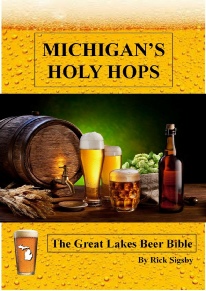 Creative 360 welcomes the return of Rick “I’ll have another beer” Sigsby who will share excerpts from his book Michigan’s Holy Hops: The Great Lakes Beer Bible. Did you know that the number of breweries in Michigan grew from three in 1991 to more than 250 by June 2016? Learn more about Michigan’s brewing history, the myths and mysteries associated with beer, and try a sampling of award-winning beers from the Midland Brewing Company, Saturday, August 12 at 7:00 p.m.

In his introduction to Sigsby’s book, Larry Bell said, “…it is an industry filled with engaging, quirky and iconic personalities that rarely leaves one with a dull moment.” Sigsby will introduce us to some of these personalities and the breweries who have made Michigan one of the pioneers of the “better beer movement” for more than 30 years.

Bring your copy of Sigsby’s book for signing or purchase signed copies at the event.

A lifelong resident of Michigan, Rick Sigsby is a retired park ranger, author of seven books, and owner of race horses. He had a newspaper column called Rick Off the Record, and has been a regular contributor to several nationally circulated horse racing magazines. He resides in Coleman. Learn more on his website at rigsby.com.