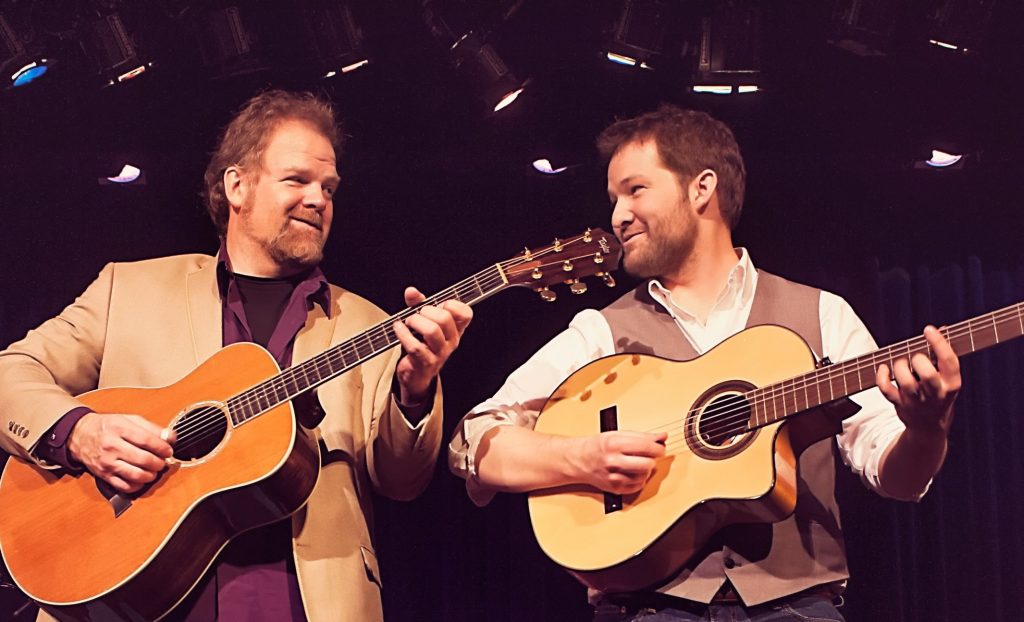 The Younce Guitar Duo takes listeners on a musical journey colored by the influences of jazz, Gypsy guitar, Flamenco, Latin and other world music. Ryan explains their music as a fusion of sounds from around the world – jazz from America, Latin America and even some Celtic sounds get flirted with. The father-son bond that Jerry and Ryan share has helped shape their unique sound. They perform with a joy and enthusiasm that is infectious. Their musicianship, warmth and sense of community have inspired a fan base that follows them from venue to venue.

Audiences across the state have enjoyed the dynamic sounds of the duo’s richly layered guitar work. The sounds and influences adopted and nurtured by Jerry and Ryan throughout their careers, have blended to create their own. Their rich guitar stylings, highly sculpted and textured rhythms and melodies, are pleasing and accessible to audiences of all ages.

Younce Guitar Duo began in 2008 when Ryan invited his father to join him for a local gig. “I have a great time playing with Ryan,” said Jerry. “Our ability to read each other and understand where we are going with a piece of music is really special.”

Jerry’s admiration for his son is apparent on stage, and the feeling is mutual. Ryan credits his dad for much of his musical inspiration, saying “Of course my father was an influence. When your dad can play anything, and you’re a 14 year old struggling with a piece of music, you’re always striving to be like him.”

Before joining forces as a duo, both Ryan and Jerry had been active in the Michigan music scene. Jerry was born in Detroit, and as a teenager became an active player in Detroit’s burgeoning jazz scene. Enthralled with the music, he pursued Jazz Studies at Wayne State University, and guitar under the direction of jazz guitarist William Leavitt at the Berklee College of Music.

Jerry was a studio musician in Detroit, and played the Midwest resort circuit for a couple of years. During his tours, he discovered that many of the Midwest’s best show bands were playing at a resort on the shores of Torch Lake near Traverse City. Eventually Jerry moved to northern Michigan, became a member of the resort’s band, and spent his time playing with many touring musicians and vocalists. After his children were born, the demands of raising a family and the early successes of one, and then another, business venture slowly led Jerry in the direction of other opportunities. Music always remained a central part of his life, however, and he introduced his sons, Jesse and the younger Ryan, to music as soon as they were born.

“My father is quite literally music,” said Jesse. “It encompasses his entire being. He is always making music.”

The boys grew up surrounded by their father’s guitar playing and love of music and inherited his musical enthusiasm. Early on, Ryan and Jesse played in an indie rock band, and then later formed the alternative rock band, Escanaba Firing Line. Though the music the boys played was quite different from their father’s, Ryan and Jerry discovered their musical backgrounds and approaches are quite complimentary.